Manchester United talisman Cristiano Ronaldo has extended his advantage at the top of the Champions League scoring chart after his brace against ItalIan Serie A side Atalanta earlier on Tuesday night. 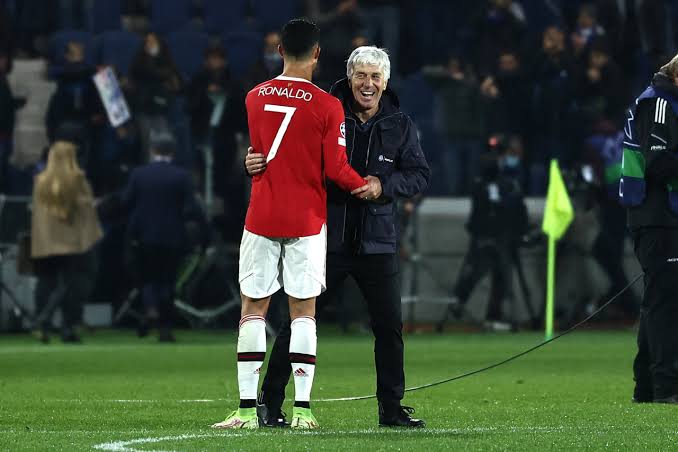 Ronaldo scored twice either side of the half-time interval as Manchester Unitedcame from two goals down to secure a 2-2 draw with their hosts.Portugal international Ronaldo started the latest Champions League matchday with 137 goals and 14 goals more than nearest challenger Lionel Messi. Little Argentine wizard Messi had scored 123 goals before the latest matchday, but he could not add to his tally due to injury. The six-time Ballon D’or winner was a major absentee for the away game against German Bundesliga side RB Leipzig which ended in a 2-2 draw.

With Messi not in action, Ronaldo was able to extend his lead over him to 16 goals on the Champions League scoring chart thanks to his two goals against Atalanta. The goals from Ronaldo rescued a 2-2 draw for Manchester United to take the Premier League giants to within one win of the knockout stage.

Atalanta got off to a good start with the goal from Slovenian international Josip Ilicic on 12 minutes. The shot from Ilicic somehow found his way past David De Gea in the Manchester United goal for the opener when the Spaniard could have done better with the effort from the Slovenian national team star. Manchester United scored the first of his brace in added time of first half as he was on hand to finish off the best passage of play from Manchester United in the first 45 minutes after good work from substitute Mason Greenwood and Bruno Fernandes. Young England international Greenwood had come on as a first half substitute for the injured Raphael Varane.

Ronaldo also scored his second goal of the game against Atalanta in added time of second half to cancel out the advantage given to the Italians by Colombian attacker Duvan Zapata in the 56th minute. The goals from Ronaldo were significant for United who need to beat Swiss champions Young Boys at home in the next matchday to seal their knockout spot.